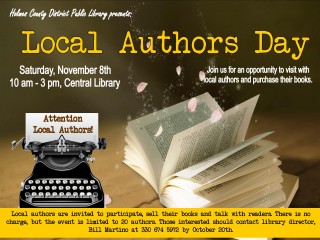 The Holmes County Library is seeking area authors to participate in the library’s “Local Authors Day.” This event will be held on Saturday, November 8th from 10 am to 3 pm at the Central Library in Millersburg. Tables and chairs will be provided in the library’s meeting room for authors to sell their books and talk with readers. Each will also be given the opportunity to present a brief 10 minute discussion about their work in the Commons Area. There is no charge, but this event will be limited to 20 authors. Those interested should contact Bill Martino at 330-674-5972 by October 20th.

Raymond Buckland – In 1962 Raymond Buckland came to the United States from England, where he had written comedy scripts and was personal scriptwriter for a popular British comedian. His first book was published in 1969. Since then he has had well over fifty books published (both fiction and non-fiction), with nearly two million copies in print and translated into seventeen foreign languages. Raymond’s newest novel, Dead for a Spell was released October 2014 from Berkley Prime Crime. You can visit Raymond’s website at www.raymondbucklandbooks.com/

Anne Hunt – Anne is the great-granddaughter of David Freedlander, who founded The Buffalo One Price Clothing House which was later renamed The H. Freedlander Company by her grandfather, Herman. After graduating from Wooster High School, Ann received her B.S. in Education from Ashland University. Instead of immediately pursuing a career in teaching, she went into the family business. She loved retailing. When the City of Wooster announced that Freedlander’s would be torn down she was shocked and saddened as were myriads of others. She had thought about writing for years. This was the motivation she needed. Ann’s memoir, Gone but not Forgotten: A Freedlander Legacy, is the history of Freedlander’s from 1884-1989. It also includes over 100 stories from customers across America, world, national, and local history that impacted the retail store, and fashion changes during those years.

John and Kristin Lorson – John Lorson is a writer, humorist and local entertainer who, along with his wife, Kristin can claim over 900 published works as their humor column “Send Help” has appeared in local newspapers, accompanied by Kristin’s comic illustrations, every week for over nearly 18 years. Their book “Send Help: Delights, Dilemmas and Delusions of a Modern Midwestern Man” was published in 1999, but has recently enjoyed a rebirth of sorts as a new generation of readers discovers the joy of laughing their way through everyday life. By day John is the Coordinator of The University of Akron’s Wayne College Holmes Campus, a satellite campus of Wayne College located in downtown Millersburg and draws great inspiration from his daily commute—most often by bicycle—from his home in Orrville. Kristin (Kovach) Lorson is an accomplished artist whose commissioned works hang on walls across the US and on five separate continents.  Feel free to reach John at [email protected] or Kristin at[email protected]

Ashley Mishler – Local Teen author Ashley Mishler began writing her published works at the age of thirteen.  Inspired by her love of fantasy and poetry, she has combined the two to create vivid images and enchanting characters.  In 2014, ,she released two children’s books. Anya Tap and One Fairy Night.  You can visit Ashley’s website at www.ashleymishlerbooks.com .

Ed Schrock – Ed has been reading and writing all his life. His grandfather taught him to read when he was about three and a half years old. The attraction of the printed word has given him no relief since! Ed grew up in the farming community of East Holmes County and takes emotional refuge there to this day. He likes to keep several projects in the air at the same time. Currently he has three novels in various stages of completion, and writes a weekly column for The Budget. Ed has had one book published. It is a collection of short stories, with each story following the months of the year. Its title is Everybody Was Happy.As if that were not enough, he still works a full time ‘day job’, driving over the road truck. He says, “Why give up doing what you enjoy?”When he’s not on the road he can be found at home in Millersburg, Ohio.